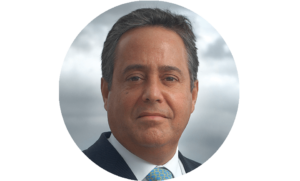 Aged eighteen (18), it is most certainly forbidden to forbid! In May 1968, it was already like that! As we founded CV&A in May 2003, and as we’ve always striven for the best possible contributors, we challenged the master of masters, Henrique Cayatte, to design the cover of Prémio. Out of our good fortune and his availability, Henrique Cayatte accepted and decided to interpret an original billboard – one of so many other originalities arising from May 1968 – transforming this into a question: Today, “Is it forbidden to forbid?”

In his words: “The May ‘68 student uprising in France was plenty generous in its production of slogans and symbols rendering support to this vast movement greatly due to the imagination and the irreverence of their productions.”

“The cover of our edition made a quotation from an anonymous billboard produced at that time and which underwent, both at the time and subsequently, many variations. As with this one.”

Cunha Vaz & Associados, SA was founded by myself and by Armandino Neves Geraldes – today owner of another agency. It was founded to be the most complete and the best company in the field of managing the institutional and financial communications of diverse entities and rapidly spread into other areas of intervention in this vast world of communication: sport, politics, brand and product launches, major events, public affairs; indeed, an entire series of services that the market requires and recognises us as being best able to provide them.

In June 2003, when we embarked on our activities, we were far from knowing that, right from that year onwards, we would pick up heavyweight clients – BCP, Optimus (the mobile telecommunications operator belonging to the Sonae Group) and ONI (the fixed telecommunications operator owned by EDP, BRISA, BCP and GALP) – we also won over one of our most emblematic clients that has stayed with us over all these years: UEFA!

As may be seen from the letter of highlights, the first time that UEFA outsourced all of its support services for staging a European football championships (Euro 2004), the organisation did so in Portugal and with Cunha Vaz & Associados. Various large scale projects would undergo development over the first seven years of our experience. Among these, I would highlight the organisation of the visit by Pope Benedict XVI to Angola and the African Cup of Nations for 11-a-side football (CAN 2010). In both these projects, we designed and produced everything from A to Z, naturally with the collaboration and input of partners. These were two enormous projects in every possible sense but, above all, because they allowed us to learn in the field the differences between working in Portugal and working internationally.

Around this time, we also started out on “making election campaigns”, “winning” some, “losing” others. For the Councils of Lisbon and Gaia, for the Autonomous Region of Madeira, for the Presidency of the Republic, with Mário Soares and, afterwards, with Maria de Belém Roseira, for the PSD (Luís Filipe Menezes), and, outside of Portugal, for the Presidential elections in Guinea Bissau, Cape Verde and Angola and various different elections in Brazil.

The client portfolio kept on growing – with the landmark Sport Lisboa e Benfica leading the way –, with new companies such as Visabeira, Mota-Engil, KPMG, and the brand CV&A became a market reference within a period of around two years. To the satisfaction of our clients and displeasure of some competitors, the business went through some highly enthusing times.

In the meanwhile, we began working with the Portuguese Football Federation, our international clients increased in number and quality, the networks of independent agencies called for our presence and, both at GFCNet and at Worldcom we experienced interesting moments of learning. We later signed up to the FTI network and our projects in the financial area took on a new lease of life. I cannot miss the chance to thank Grupo Albion, our partner in Spain, the staff at Paget Langford-Holt and Alejandra Moore who assisted us greatly in our international rise and helped us expand into Colombia. 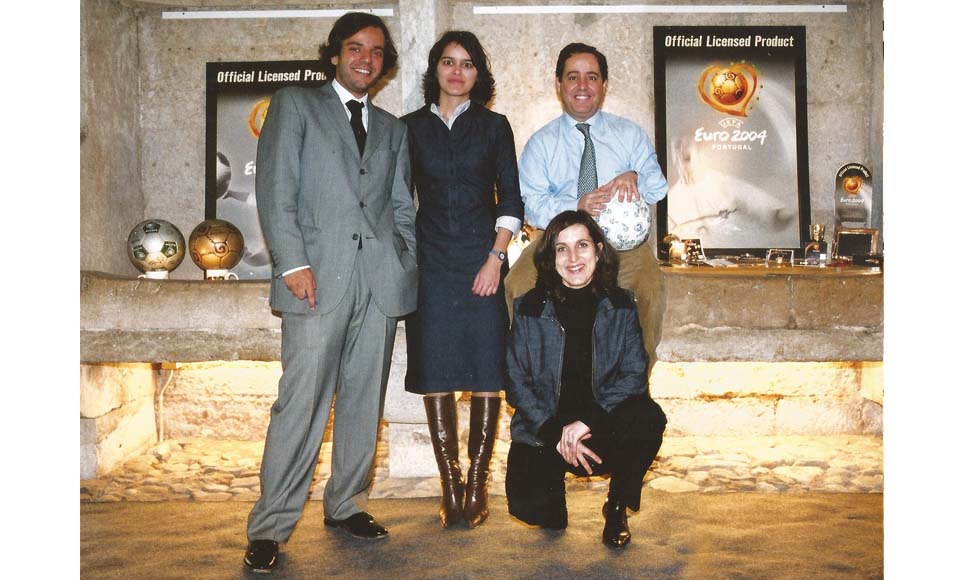 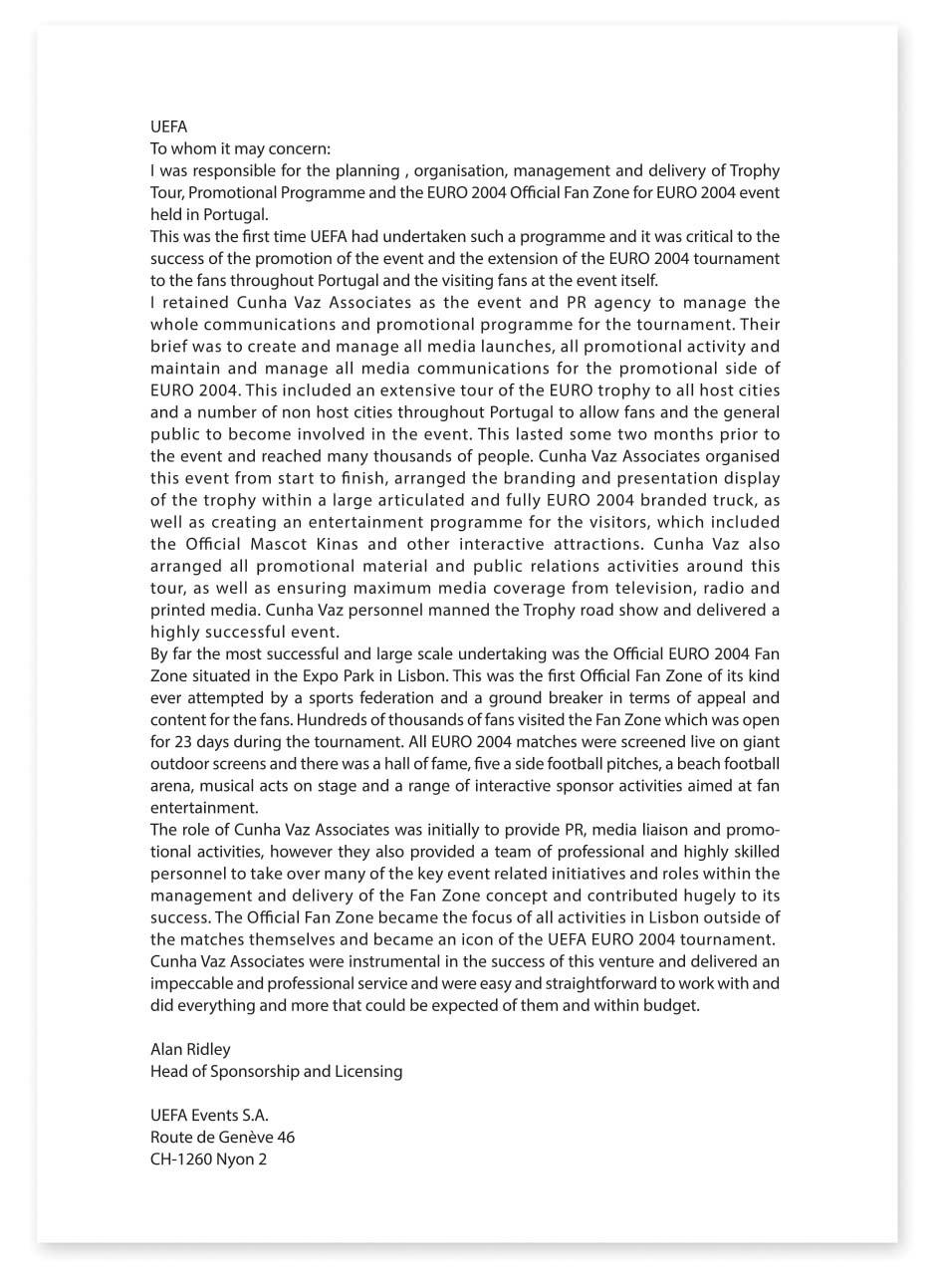 2009 was an important year. On 11 September, we officially opened CV&A Brasil with offices in São Paulo and Brasília, and CV&A Angola opened in Luanda on 21 September before, on 30 September, it was the turn for CV&A to open its branch in Maputo, Mozambique. Of particular importance to our presence and growth in these markets were two members of staff and today CV&A shareholders in Portugal; David Seromenho and José Pedro Luís. Without their inputs, the business in those geographies would not have extended beyond intentions. After all these years, they remain the managers responsible for the respective offices.

2010 had everything set to be an exceptional year and the beginning of another glorious cycle, however, inexperience in international business led us not to count on the non-compliance of a major client – certainly in terms of turnover – which plunged the company into a crisis that dragged on from the middle of this year and into 2012 – the date when we perceived that we would not be getting paid for the services duly rendered – through to late 2015. We almost believed in the seven years of bounty – 2003/2010 – would be followed by seven lean years. And so did it happen. After this negative impact that led us into contracting an extremely high level of debt (this was 2013 and we were no longer able to ask for any further patience from our suppliers), the episodes in Portugal came tumbling one after the others and, from the failure of some major companies to the restructuring of others, we incurred huge losses. With cooperation from every side – staff and suppliers – we found a way to outlast the recession and, in 2016, we re-emerged and became, and now for the last three years, the largest Portuguese company in this sector. None of this allows us to rest as the economic cycles and the impossibility of planning the medium and long term are sure to keep us highly attentive.

However, this editorial is of celebration. Without any euphoria but with a great deal of pride. The business figures for 2020 were very substantial. We may once again state that, among the companies that submit their accountancy and management reporting in accordance with the law, we are not only the market leader but are above all an increasingly solid company.

I close as I should have started. I invited various “opinion makers” to write for this edition. Of these renowned personalities, I shall only highlight those who I consider belong to this house. I would thank all of those who have made CV&A better, my thanks to all those who have spent time here. To show the respect that I have for all, I would express my most sincere gratitude to David Seromenho and Inês Santos, almost founders, and to António Figueira and Pedro Reis, who made such relevant contributions towards ensuring that we thought more insightfully. To Francisco Mendia and Ricardo Salvo, of course, as without them we would have no direction, I would proffer the deepest and warmest of embraces.

And nobody can every forbid us from anything. Far less so from dreaming! 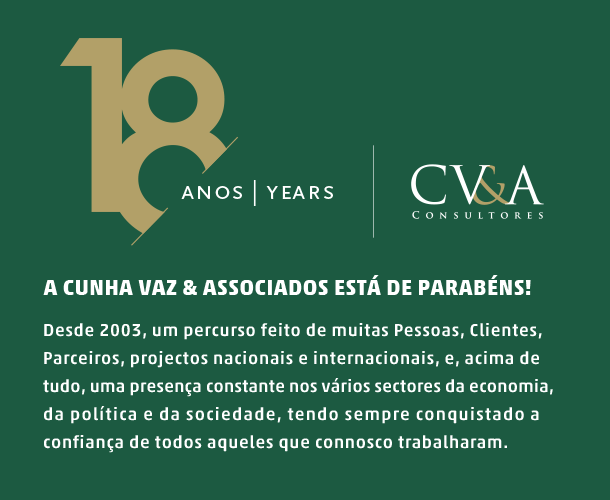 Around the world in one page

António Cunha Vaz, Chairman at CV&A https://revistapremio.pt/wp-content/uploads/2021/01/roda_da_sorte.jpg The New Year starts with the usual best wishes of peace, health and love for everyone, and prosperity for...
Read more

António Cunha Vaz, Chairman at CV&A The day before something we wish for, or not, is always relevant. This issue of Prémio is the last...
Read more

A new normality… is demanded!

António Cunha Vaz, Chairman of CV&A On March 12th, the previous issue of Prémio was duly printed and ready to be distributed. Its content was...
Read more
- Advertisement -